They looked at the men in front and behind them, each holding the other’s hand. Wearing only boxer shorts, they wore black hoods with small openings for their eyes – hoods to protect their identity. 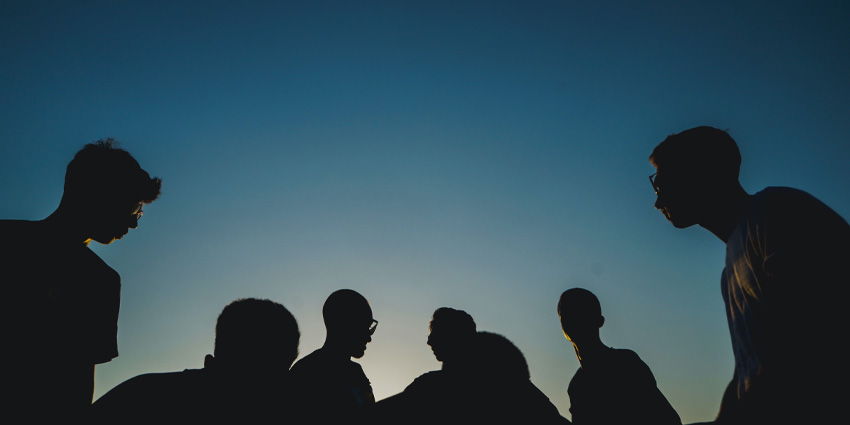 “What about our identities?” he thought as he leaned forward looking lazily over at the 12 men in front of him. Twelve men, exactly like the disciples. Except that these 12 men were here for the men in their presence and to learn from them.

The weekend introduction course for dominant men had looked intriguing – he had wanted to push his own limits as a bottom for a while and this had looked like the perfect opportunity. In the morning, there was a theory session on impact play and rope work. Today it was on spanking and the different tools you can use for impact playing. Then everyone was allowed to have three 20-minute practice sessions with different men. They were taught to control and command these men using words, gestures and even their tongues. Unless they heard the word “stop” they could do anything they wanted to these men.

It felt overwhelming somehow and deliciously exciting, and he laughed inside as he realised he wasn’t quite sure what he was going to do first. Although it seemed like a big responsibility, he knew he would make the time together enjoyable.

As they faced the men, the submissives formed a small circle around them. The dominants looked at the submissives and felt their bodies as though they were in a slave market. And it felt exactly like that – like having a harem of male slaves, there to do anything that was asked of them without question.

He picked the tall, thin blonde to be his first male sub experience. He touched his forearm and led him back on his mat. He was surrounded by men who were willing to play with them as toys. He wished he had an electronic camera to capture the stunning images as he watched a small, boyish man behind him put a collar over the muscular, slender man in front of them and then push the man down on his all fours so that he could sit beside him.

Focus, he thought – you don’t have much time. He asked his sub to stand on his knees, and instead of tying him, he stood in front, grabbing his chin with his hand, so that he could look at him. Looking up at him, he answered “yes Master.” Michael could hear the defiance in his voice, so he told him not to look at him unless told to.

He collared him and attached the dog’s lead to him. This would allow his sub to know who he was, instructed him to lie down on all fours, and then made him move around the room following him, pulling him if he became slow. He stopped along the way to speak with other dominants. Meanwhile, another sub, who was being instructed by another master sniffed his sub as if he were a pet dog, watched amusedly. He could tell that this felt humiliating to his sub as he squirmed, but he managed to stay put and looked a little relieved when another ‘pet’ came over to them-the distraction meant they could move on.

He directed him to get his boxers off and sit down on his stomach. He watched him hesitate for a moment and wondered if he was the new one or even the ‘straight but curious’ one the teacher had talked about, but in a moment he was naked in front of him.

He instructed him to use a riding clip to push his legs apart. His shoulders supported him. He pulled his hands together behind his back and tied his hands to him with a knot that a friend had shown him.

After rubbing the sub cheeks gently, he continued to slap him with more slaps. He enjoyed the sound of his skin being spanked. He pulled him close and asked him if he needed more. He nodded, and he pulled his hair back sharply. “Yes, what?” He heard the answer he wanted and continued to spank him, harder this time and faster to increase the intensity, enjoying how the arse in front of him got redder and redder. He heard him gasp and continued to spank him for another minute, before taking a break. Feeling the thin layer beneath his fingertips, it was a sign that he was in shock.

He took a short break and used the back of his hairbrush. It was getting harder and faster until he realized how much he enjoyed it. He saw his sub tire and pulled him to a sitting position. They then knelt together, their eyes meeting. He said he wanted to delight him, and allowed him to touch his body. He did it with passion and realized that he had been hoping and waiting for this. He leaned back, letting him suck and lick his nipples. Realizing that he was enjoying the experience more than he had been told to, he leant back.

“Time is nearly up so bring it to a close in the next minute or two please.” Stroking his face and thanking him, he stopped him, instructing him to stand up and kiss him.

Once the men had left, they exchanged feedback. The sub collective then returned in, holding hands again for support and brotherhood.

One of the men standing next to him asked for a team and asked him to lead. They agreed it would be fun and led the other man away. This man was muscular and had tattoos. Shortly thereafter, the instructor asked if they could allow another man to join them. The dominant was taking a break and they were left with two men naked next to each others. They played side-by-side with the men. He sat astride his sub teasing him with his cock edging it near his mouth, watching his reactions, holding onto his arms so he couldn’t reach down to touch him, as he realised this sub was not good at listening to instructions like the first one had been, and kept touching him when he hadn’t allowed him to.

“You are very hot, Master.”

He took his chin in his hands and spoke harshly back to him.

“I know that, but I don’t need you to tell me and I didn’t give you permission to speak so shut up. And don’t look at me unless I tell you to.”

As he looked at himself, he realized how much he loved the power to tell someone what to do. This man belonged to his for a brief moment and he knew what to do with him. He bent down to his ear and whispered to him how he was going to fuck him – slow at first and then harder and harder until he would drown in sensation. Putting on a condom and using lube on himself, he squirted more lube on his sub, making sure the sub’s arsehole was slick and clean.

Bending down on his knees, he lifted the sub’s legs up onto his shoulders. He began by entering the sub slowly with one finger. Slowly, he added another finger to the mix. The men grunted behind his hoodie as if they were enjoying the experience.

After he felt his muscles relax, he decided that he was ready to enter the man inch by inch. He continued to thrust into the man, enjoying the feeling of being able to fuck someone who would never see his name or know his identity. Watching his body shake as he penetrated his rhythmically, he did this repeatedly.

He was determined to stop him from coming, so he pulled away from him, used clamps for pain relief, and began to slap at his genitals. He looked over and realised both subs were holding onto each other’s leg as if they needed to support each other through this trial.  The teacher walked over to them and whispered to him “let’s discover their boundaries.”

Sometimes people just needed permission to do things they didn’t trust themselves to do, so both dominants stood up, telling each man to turn to the one next to him and kiss. Watching both their arousal, they instructed the men to play with each other and listened to the grunts as both men tugged at each other’s cocks faster and harder. As they stood above them, the dominants encouraged them to get up on all fours and discussed loudly which man should fuck.

As they massaged lubricant onto their condoms for each other and the man in the front of them, they finally told one to get up and give him a condom. He was instructed to finger fuck his friend, and they both enjoyed the gasps, quivers, and sexy flings. The air was filled with animalistic sounds as the men collapsing onto the floor.  Some of the dominants watched the room.

He bent down beside them and slapped both of their cheeks hard.

“Well, I don’t think you’ll ever look at your best friend the same way again. Now stand up boys – we haven’t finished using you yet.”